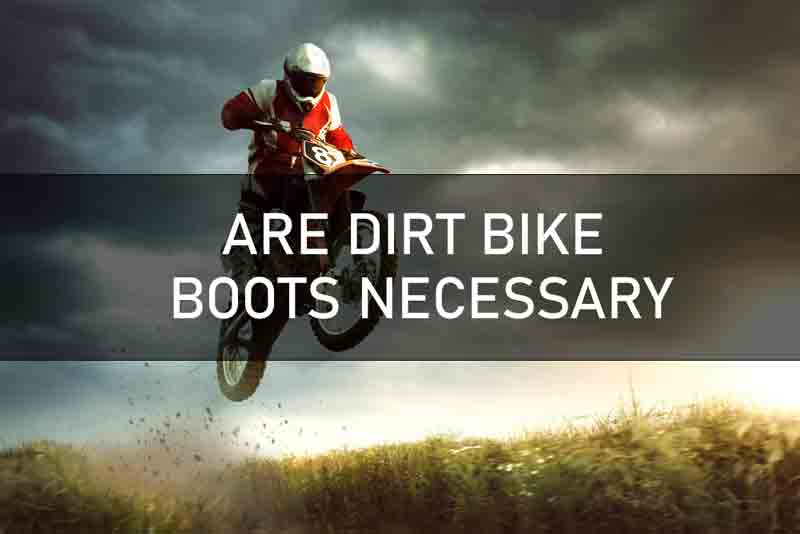 Are Dirt Bike Boots Necessary? A dirt bike boot is a type of motorcycle shoe that is worn when riding a dirt bike or an ATV. They cover from the ankle up to just below the knee, offering the rider protection from injury over other types of over-the-ankle shoes.

Dirt bike boots are composed of many different types of materials, including leather and synthetic fibers, depending on the brand.

Dirt Bike Boots – Why Do You Need These?

Motorcycle boots are necessary to protect the rider’s feet, ankles, and legs. The ankles are very susceptible to injury when dirt biking because of the nature of the sport an ATV is unstable and riders usually go fast-moving over rough terrain.

When you ride your dirt bike, your ankle can be twisted or turned if it gets caught between the tire and the gear shifter or brake pedal, which can cause serious injury. Your leg can also be caught between your dirt bike and another object such as a tree, rock, fence post, etc. This will most likely result in broken bones of some kind (typical fractures to both of your lower leg bones – tibia and fibula ) and can also cause damage to the vital arteries in your lower leg.

Dirt bike boots are designed specifically with these problems in mind. Dirt bike boots provide the rider protection from injury over other types of shoes, especially when riding an ATV off of paved roads onto even more rugged terrain. They usually have a reinforced toe area to protect them from being snagged on the gear shifter or any other moving part of the dirt bike.

What Are Motocross Boots Made Of?

Dirt bike boots are typically made of leather, but some manufacturers also make them with synthetic materials for cheap riding boots. The boots may also have a mesh panel on the instep and around the ankle to help keep your feet cool and give them extra flexibility. They should be well maintained and conditioned with special cleaners and conditioners to ensure your own safety as well as the longevity of your dirt bike boot.

The Types of Dirt Bike Boots

There are many types of dirt bike boots on the market, but they mainly fall into one of two categories: motocross boots and ATV boots.

The ATV boot is more similar to a work boot, as it covers the ankle and lowers the shin. However, it has plastic protection that extends from just underneath the ankle to just over the knee.

The motocross boot, in comparison, is similar to a hiking boot. It covers from the ankle, around the calf, and up to mid-shin level. Like the ATV boot, it also offers plastic protection where necessary.

How To Choose Dirt Bike Boots

When looking for a dirt bike boot, you should aim to find one that is made of high-quality materials. The last thing you want is to get halfway through your ride and have your shoes fall apart on you. It’s also important to take time determining the right size for your foot, as well as selecting a shoe style that works for you.

What To Look For in Dirt Bike Boots

When looking for dirt bike boots, the first thing to consider is how high up your ankle you want them to go. You can choose either mid-shin length or over-the-ankle boots. It’s also important to decide what type of foot protection you need. Dirt bike boots are available with steel toes and without, along with different qualities of padding.

What Style is Best for You

Generally speaking, sport dirt bike boots are designed to make the rider more effective on the bike. This type of shoe features an asymmetrical design that gives riders greater mobility and control. Just be sure not to neglect style choices when shopping for your dirt bike boots.

Who Should Wear Dirt Bike Boots

Anyone who rides an ATV or dirt bike should wear a pair of dirt bike boots, as they offer the best protection compared to other types of shoes. Remember that you can never be too safe when enjoying your vehicle.

What Is The Point Of Motocross Boots?

Dirt bike boots exist to protect the feet of riders from injury, so don’t go riding without them! They should also be durable enough to stand up against the test of time.

What’s The Difference Between ATV Boots And Motocross Boots?

The main difference between ATV and motocross boots is that ATV boots take on a work boot model, while dirt bike boots are designed to be more like hiking shoes. This is because the rider needs as much mobility as possible when riding their vehicle.

When you are riding with ATV boots, you should also check the type of terrain you are on. Thick mud may create resistance, causing your foot to become stuck in the mud with each pedal stroke.

What Type Of Dirt Bike Boots Should I Buy?

You can buy dirt bike boots at most outdoor equipment stores, as well as some large retailers such as Wal-Mart. When purchasing your first pair, it’s wise to go with a model that has been previously tested and recommended by other riders. You’ll also want to check reviews on the web.

How Can I Tell If My Dirt Bike Boots Are The Right Size?

You should always measure your feet before shopping for a pair of shoes, but take note that sizes vary from brand to brand. It’s also important to find out if you wear boots in normal or wide widths.

It’s preferable to wear dirt bike pants because they will protect your entire leg, instead of the boot only. They are also more comfortable than boots and easier to walk around in.

Can You Wear Sneakers On A Dirt Bike?

It’s never a good idea to ride your dirt bike or ATV in anything other than proper riding gear. Sneakers are not made for riding, and they will most likely fall apart after only a few miles on the trail.

Can You Put Motocross Boots In The Washing Machine?

You shouldn’t put dirt bike boots in the washing machine because doing so will ruin their waterproofing qualities. You should instead clean them by hand, or else you could damage the stitching as well as your footwear.

Why Are Riding Boots Important?

Dirt bike boots are important because they offer the rider protection from injury. They should also be easy to slip on and off since you won’t get very far with tight shoes when it’s time to dismount.

How Do I Clean My Dirt Bike Boots?

It’s a good idea to purchase a separate pair of riding gloves so that your dirt bike boots don’t get ruined while you’re out on the trail. You may also want to bring a bottle of water with you since spills will happen from time to time.

What If My Dirt Bike Boot Doesn’t Fit?

If your dirt bike boot does not fit properly, it could be because they are too tight. This can cause discomfort, as well as pressure on the foot. You may want to try a larger size or another model with your next purchase.

Dirt bike boots protect riders from injury and give them better control of the bike. Always take time to determine your correct size and style before purchasing a pair of dirt bike boots.